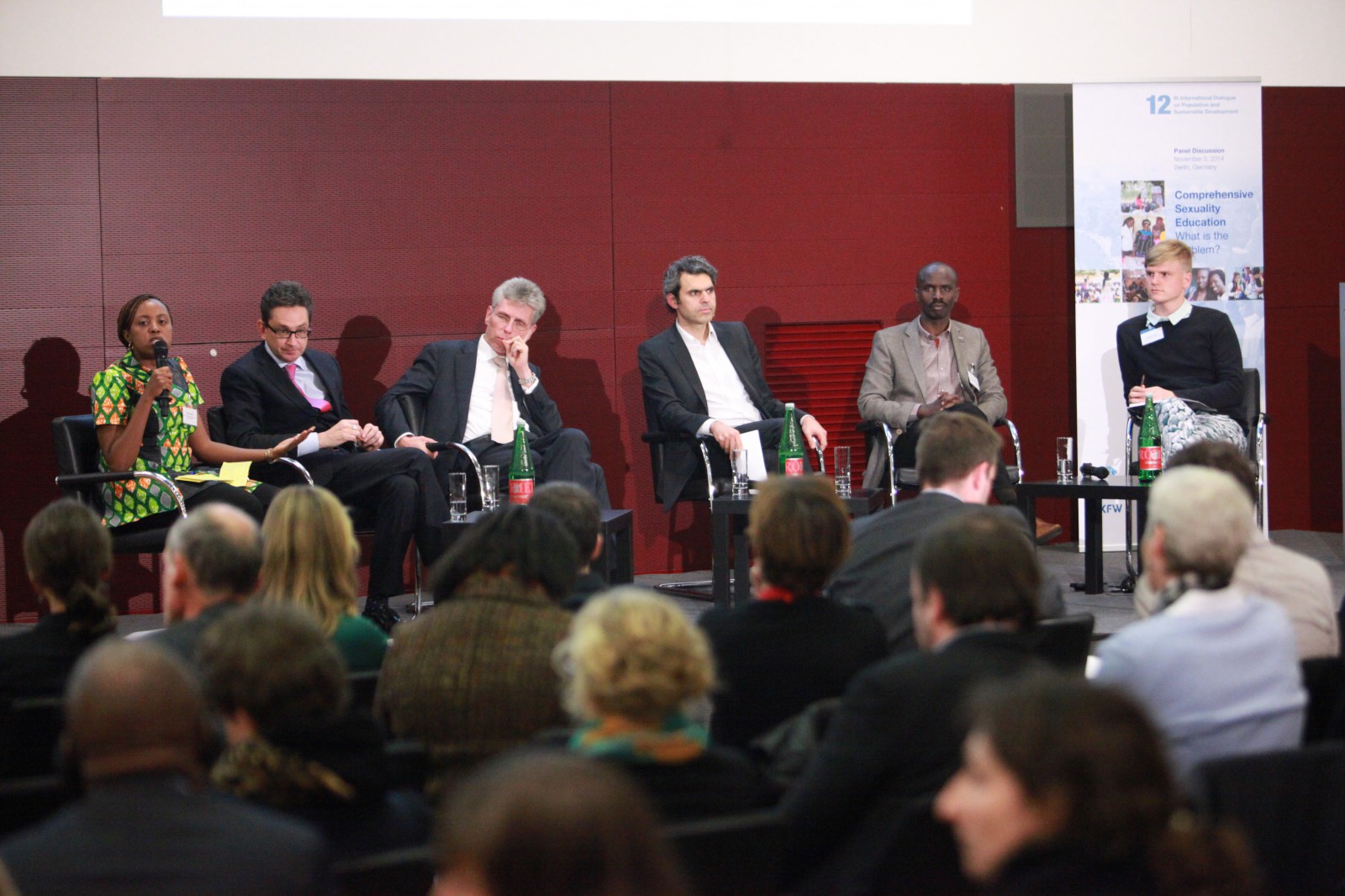 The evening program saw delegates and interested members of the public gather at Germany’s Federal Ministry for Economic Cooperation and Development (BMZ) in Berlin for a talk on comprehensive sexuality education (CSE). In a panel discussion titled ‘CSE – What is the Problem?’ five speakers tackled issues surrounding contraception, age appropriate curriculum and the risks of failing to educate youth about their bodies.

The panel included Michiel Andeweg, Board Member at CHOICE for youth and sexuality (Netherlands) and Yvette Kathurima, Head of Advocacy, FEMNET (Kenya). They were joined by Christoph Lehmann, Vice-President of the Association of Catholic Parents in Germany as well as Jon O’Brien, President of Catholics for Choice (USA) and Wilson Sossion, Secretary General of the Kenya National Union of Teachers.

Family planning eases the path to education and employment

Thomas Silberhorn, BMZ Parliamentary State Secretary greeted the panel in his opening remarks and reminded them of some of the issues at stake in this debate. He told the audience that more than 200 million women and adolescent girls who want to prevent pregnancy don’t have access to modern contraception.

Approximately 800 women die every day from preventable causes related to pregnancy and childbirth, he explained. “Early pregnancy generally leads a girl to break off her schooling, meaning she has virtually no chance at attaining gainful employment,” he said, adding that the booming youth populations in developing nations need to be provided with opportunities for education and employment. Family planning and sexual health, he explained, are part of this.

He was followed by Renate Baehr, the Executive Director of DSW (Deutsche Stiftung Weltbevoelkerung). Baehr said her foundation supports CSE, but also acknowledged that there are many people who disagree, laying the groundwork for the evening’s debate. She said that the discussion about what to teach children (and when) continued to divide communities, with little evidence of real listening happening on either side of the debate.

She asked the audience to imagine what her life would be like without understanding procreation or sexually transmitted infections. “How would this affect my ability to plan my life, or to maintain my health? To pursue an education or get a job?” Knowledge and control of one’s own body are essential for a self-determined life, she said, turning the floor over to the panel members.

How much do young people need to know?

The discussion opened with several panel members describing the way they learned about sexuality. Jon O’Brien, President of Catholics for Choice (USA) grew up in the Republic of Ireland, where “homosexuality was illegal, divorce was not allowed, contraception was greatly restricted, abortion was illegal and most books on sex education were banned”. Many young people around him at that time had no idea about their bodies in any formal sense – as a result, he said, there were high rates of teen pregnancy.

Michiel Andeweg, from the Dutch youth and sexuality organization CHOICE, weighed in with a different take. He said CSE provides young people with information so that they can make informed decisions about their sexuality.

“CSE can protect us from HIV transmission and unwanted pregnancy. It also prevents us from becoming actors or victims in sexual violence. With that CSE can saves lives,” he said.

What message are we sending when we provide young people with condoms?

Not everyone agreed that providing young people with access to modern contraception methods is an acceptable step. Wilson Sossion, Secretary General of the Kenya National Union of Teachers called into question a bill currently discussed in Kenyan parliament which he interprets as an attempt to distribute condoms to children. He said he was in favor of sexuality education because the nation had been “crippled by HIV and AIDS” but that the distribution of condoms was not acceptable.

“Our concern is that free access will encourage higher sexual activity among the youth. We need to go back to the drawing board. Let’s draw up a plan that doesn’t open the flood gates,” Sossion said.

His comments failed to impress another Kenyan speaker, Yvette Kathurima, the Head of Advocacy at FEMNET. She supports Kenya’s move to create a Reproductive Health Bill. “I would like to disagree with Mr. Sossion,” she began explaining that the proposed legislation should not be reduced to its wording on contraceptives.

“The Reproductive Healthcare Bill is in its entirety a framework to provide and protect the advancement of reproductive healthcare for both women and children,” Kathurima said. “We need to look at this bill in terms of what it is trying to prevent, what it is trying to protect. We have a high incidence of unwanted pregnancy which ultimately lead to unsafe abortion, HIV cases.”

Andeweg also urged panel members to think about all the issues tied to sexual activity and identity. “CSE has to go beyond the biological aspects of sexuality. It must be evidence based and be about gender relationships including different sorts of gender orientation and identities,” he said, adding:  “It should also include knowledge about sexual rights and have a positive approach that builds the self-esteem of young people.”