On November 5th, delegates arrived at GIZ House in Berlin, ready to assess the International Conference on Population and Development (ICPD) review process and the first phase of post-2015 negotiations.

They were welcomed by Günther Taube, Head of the Department Education, Health and Social Protection, from Deutsche Gesellschaft für Internationale Zusammenarbeit (GIZ) GmbH. “Despite much progress in recent decades in terms of health indicators around the world, it is still time to worry,” he said. “Over 200 million women do not use reliable family planning methods, though they would like to do so. Each year this unmet need results in 80 million unwanted pregnancies and 42 million abortions, 20 million of which take place under unsafe conditions.”

His comments were echoed by Klaus Brill, Vice President of Corporate Commercial Relations at Bayer HealthCare. Brill urged delegates to use the time in Berlin to exchange strategies and improve negotiation tactics. “Sexual and reproductive health continues to be too low on the political agenda,” Brill stated. The ideas captured at this conference, he continued, would be used to “create a catalogue of recommendations to ensure that sexual and reproductive health and rights (SRHR) is included in the post-2015 development framework”.

Brill recognized the importance of securing rights for young people, which despite the absence of a target centered on young people in the proposed sustainable development goals. “We should continue to focus on young women and girls as the most vulnerable groups, especially in developing countries,” he concluded. 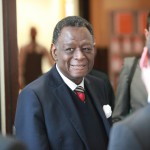 In her welcome address, Ingrid-Gabriela Hoven, Director General, Global and Sectoral Policies at the German Federal Ministry for Economic Cooperation and Development (BMZ) remembered the history of the Cairo Conference. “The ICPD marked a paradigm shift in the field of population and development,” she said. “Since the 1994 Cairo conference, we have focused on people as individuals – and on their needs. The Cairo program of action was the first document to recognize each and every person’s right to sexual and reproductive health.”

She noted a number of successes since then, including halving maternal and child mortality rates, and outlined Germany’s commitment to keeping that momentum going.  “Germany will be doing everything it can to make sure that the post-2015 agenda lays the foundation for a more just peaceful and sustainable world,” she told delegates. “Sexual and Reproductive Health and Rights are an important part of that. One example of [our] support is our initiative on rights-based family planning and maternal health. The aim is to enable women to decide themselves on the number of children they have and the spacing of their pregnancies. This impacts positively on children’s health and education, the economic prospects of the entire family, and population trends as a whole.“

Babatunde Osotimehin, Executive Director of the United Nations Population Fund (UNFPA), then delivered the day’s keynote speech. He placed a ten year old girl at the heart of the fight for sexual and reproductive health and rights.

“The picture of those who are excluded is epitomized by the image of a poor little girl in a rural area, without education. She is the most vulnerable,” he remarked. “She’s married at ten, to a man four times her age. Her humanity, dignity and bodily integrity is brutally violated. Her childhood is cruelly ended. She ends up getting pregnant at 11, develops fistula and dies without us ever knowing who she is.”

But Osotimehin said the work of the past twenty years had helped change the narrative of this girl’s life. Since 1994 nearly a billion people have been lifted out of poverty, there are more girls in school, women in the workforce and women in politics, he pointed out.

He warned that the fight to protect and empower that ten year old girl is far from over. The next round of negotiations is expected to take aim at her human rights, by shrinking the definition of human rights to political rights. “This is about the social rights of people. People being allowed to be who they are wherever they are,” he emphasized. “You can’t have development without rights.”

He tasked delegates with getting that ten year old into school, providing her with education, information and health services as well as the self-determination to make choices about her relationships, her career and reproductive future. He then called for deep financial commitments from the entire global community, including developing nations. “We have to work with governments and tell them that progress doesn’t come from new airplanes,” he said. “It comes from human capital development and that’s where we must invest.”

The return on this investment is the creation of a healthy, prosperous global community, in which this girl becomes an important player.