The disconnect between the capitals and New York, South Africa’s leadership on issues of SRHR and ensuring rights are protected are just a few of the issues which resonated with delegates at the 12th International Dialogue on Population and Sustainable Development. In the following interview, Zane Dangor, Special Adviser to the South African Minister of Social Development is joined by Samuel Kissi, a youth advocate and development consultant based in Accra, Ghana. The pair shared their thoughts on the key issues and best solutions as they apply to African nations. While they are both leading voices on SRHR in Africa, they come at the issues from different perspectives.

Saroja Coelho: In her speech, Lola Dare touched on the disconnect between capitals and New York. This was also part of the Open Space session, which you both participated in. What are your thoughts on the breakdown in communication?

Samuel Kissi: There is growing recognition that capitals and their missions based in New York or Geneva or regional headquarters based in Addis Ababa, do not always seem to sing from the same hymn book. The challenge has been how to fix that. We’ve had lots of discussions… but we haven’t come far.

How does this affect negotiations? 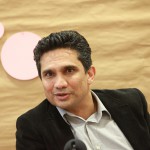 Zane Dangor: If you look at the African continent, we’ve got very good regional documents. For example, on SRHR, the African position has been an advance of anything that has been in the UN system for a very long time. The Maputo Protocol  talks very explicitly about SRHR. It also has elements that ensure that women and adolescents access their rights. Similarly, they negotiated the Addis Declaration, which dealt with post-2015 development issues and SRHR. It was signed by Heads of State, but relatively junior officials – if one excludes ambassadors, who often don’t engage in negotiations – distance themselves from these documents. This disconnect is about people not being accountable to national positions, even regional positions. This is not acceptable because what it does is rob African women of their rights to services.

What kinds of solutions have you been discussing during this conference? 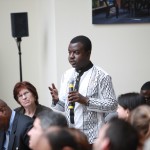 Kissi: We need to work on increasing capacity: helping people to understand what their country position actually is. There was some debate about what a country position actually is but from my perspective, if you have laws and policies at the country level, these are obviously a guide. If you are implementing programs from a national perspective – that obviously indicates where your country leans. Too often there are people taking part in negotiations who are not aware of what is happening at the country level. People who represent the government are able to say whatever they want and get away with it because there is really no accountability mechanism in place. They make interventions based on their own personal convictions, sometimes based on misinformation.

Mr. Dangor, let’s speak a little about South Africa’s special position. South Africa is quite vocal on SRHR. How can South Africa reach out to other African nations?

Dangor: Let’s look at why South Africa is vocal on these issues. South Africa experienced immense levels of oppression under the previous system. With the dawn of democracy there was a very explicit decision – a “revolutionary window” – that there would be no discrimination based on gender, race, class, sex, sexual orientation. That is enshrined in the constitution. We’re still dealing with getting service delivery, but the ideas are there.

Our position is special because of where we come from. It’s a very powerful inspiration in terms of how we see ourselves moving forward.

What we are doing with the rest of the continent is engaging in dialogue about why it’s good to have these sorts of policies in place: it saves lives. We talk about why rights make a difference in the lives of individuals that are being oppressed. So a young woman who does not get access to rights, what is the impact on her life? When it comes to a transgendered individual who does not get the kind of documentation she requires for getting jobs. There is a clear disconnect between the way she is being treated in law and the way she looks and feels and thinks.

These are very practical things we are talking about. The impact on ordinary people. That’s what we want to discuss with people on the continent.

How can cross-regional alliances on issues of SRHR be built and strengthened?

Kissi: We need to begin in the areas where we agree. There’s a lot of common ground here. From this, we can build a dialogue on the issues where we seem not to agree.

Unfortunately, the space of a negotiation doesn’t offer the chance for such dialogue. Perhaps we need to look at having certain spaces where we are not necessarily pushing towards an agreed outcome but looking at just understanding each other.